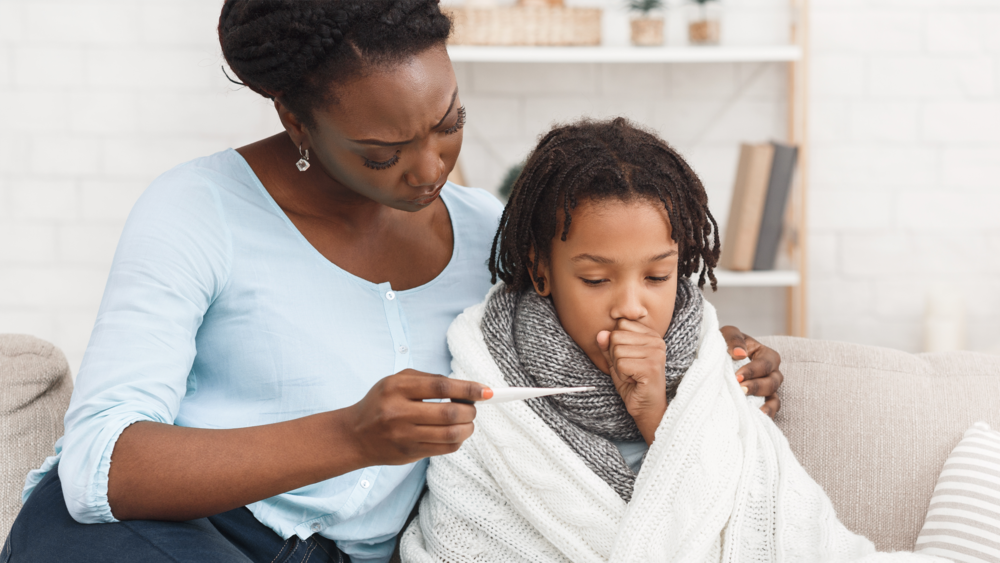 A few tips to treat a common cold

With the temperatures dropping, that time of year where you see tissues and hear sniffles everywhere, is starting again.

Is your child maybe sneezing, coughing or complaining about a sore throat? Every parent has been there. Nowadays we have to consider the coronavirus, but the usual viruses are still more commonly found to be the culprits.

The common cold, otherwise known as a viral upper respiratory tract infection, is one of the most common illnesses in children. Most pre-schoolers will have 6 to 8 colds a year and children who are in daycare could have 10 or more. It is slightly less common in older kids.

However, there is a lot you can to do keep those cold symptoms in check. Maybe you could even prevent your kid from getting sick the next time.

Is it the flu or a cold?

These two conditions share many symptoms, and it can be hard to tell them apart. They both are respiratory illnesses, but they are caused by different viruses.

The common cold is brought to you by any one of over 200 viruses, which irritates the lining of the nose and throat resulting in inflammation. Rhinoviruses are most often the cause. You can expect symptoms such as a runny nose, red eyes, sneezing, dry cough, headache and a sore throat, but less often it can also cause a mild fever and body aches. A child with a cold usually feels quite well and has a good appetite and normal energy levels. There is a gradual one- or two-day onset and as it progresses the nasal mucus may thicken. This is usually the stage just before a cold completes its course. It usually lasts a week or two even if you do not treat it, although the runny nose might linger a little longer with a post-nasal drip and irritating cough, especially at night.

Flu is caused by several influenza viruses and symptoms usually come on more quickly and your child will seem sicker than from a cold and might complain of symptoms such as muscle aches and fever with chills more commonly.

Kids who become infected with the coronavirus may have no symptoms or their symptoms may be mild and seem similar to that of a common cold. If it is a little more severe, the symptoms can seem flu-like. However, loss of taste or smell is quite indicative of COVID-19.

How do you catch a cold?

The viruses causing colds can be spread through the air or by direct contact.

If someone with a cold sneezes or coughs the viruses disperse through the air and if you breathe in that air, the virus gets stuck on your nasal membranes.

Children very easily spread cold viruses, because they touch their nose, mouth and eyes often and then touch other people, toys or surfaces.

Can colds be prevented?

The protective measures in place for COVID has actually resulted in a reduction in the spread of other viruses such as rhinoviruses and influenza. Cleaning surfaces, sanitising and washing hands are very important to curb the spread of viruses, especially in daycare settings.

Try to avoid people who have colds and teach children to cover their mouth when they cough.

Healthy eating habits and a regular multivitamin could also help to improve a child’s immunity to be able to fight against these infections. Getting plenty of exercise and to not be exposed to smoking will also boost a child’s immune system.

There is currently not treatment to take to fully prevent colds and no vaccine to prevent every possible virus that can cause a cold. However, many cases of the flu can be prevented by getting a flu vaccine every year. Even toddlers can get a flu-shot and although they might still get a common cold that year, they will be protected from influenza and its complications.

COVID-19 vaccines are now being rolled out for older people, but studies are underway to see if the vaccines are safe in children younger than 16.

How to manage it at home

Except in newborns or in immunocompromised children, colds in healthy kids are not dangerous.

There is no specific test for the common cold and no specific treatment. It is caused by a virus and therefore antibiotics will not work. The symptoms usually go away in a week or two without treatment, but there are a few things you could do at home to improve the symptoms:

When should I take my child to the doctor?

For newborns or babies under 1 year old, you can rather go to the doctor earlier, especially if they struggle to feed or seem very weak. Go to the doctor if your child:

If COVID-19 is suspected, contact the doctor immediately and take your child for a test.

Often cold symptoms resolve after 2 weeks, but if they continue or become worse, rather take your child to the doctor. Sometimes it may start as a common cold, but other infections such as pneumonia or ear infections could follow.

May you all stay warm and healthy this winter.

We use cookies so that you may have a better online experience with us.